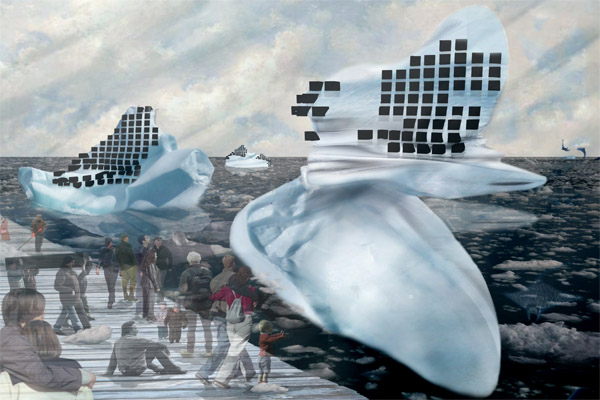 descrizione
The project is an errant cemetery which consists in an archipelago of ephemeral islands of ice.
The project considers burial as the last voyage into nature. The project consists in an archipelago of wandering icebergs where the coffins or the urns are inserted. The icebergs will wander across the ocean with no fixed route. While the ice melts, the urns or coffins will sink into the sea and lay on an undetermined point of the sea bed for all eternity.
The artificial iceberg is made up of an artificial floating structure substituting the enormous mass of ice under sea level which usually raises and supports the top of a natural iceberg.
The coffins are arranged inside in a geometric grid; their black color and geometric arrangement contrast with the organic natural form of the iceberg. The final ice ship is 12-15 metres long and 3-4 meters high, and is made up of 90-100 m3 of ice. The project takes its inspiration from the utopian military project Habbakuk”, an unsinkable aircraft carrier made of ice and Pykrete (ice + sawdust), proposed by the British during World War II. From war to burials, the itinerant cemetery proposes a novel and interesting synergy between natural and artificial elements which transforms and reconstructs the concept of burial as the last voyage into nature.
(leonardo zuccaro marchi)

This website uses cookies to improve your experience while you navigate through the website. Out of these, the cookies that are categorized as necessary are stored on your browser as they are essential for the working of basic functionalities of the website. We also use third-party cookies that help us analyze and understand how you use this website. These cookies will be stored in your browser only with your consent. You also have the option to opt-out of these cookies. But opting out of some of these cookies may affect your browsing experience.
Necessary Sempre abilitato
Necessary cookies are absolutely essential for the website to function properly. These cookies ensure basic functionalities and security features of the website, anonymously.
Functional
Functional cookies help to perform certain functionalities like sharing the content of the website on social media platforms, collect feedbacks, and other third-party features.
Performance
Performance cookies are used to understand and analyze the key performance indexes of the website which helps in delivering a better user experience for the visitors.
Analytics
Analytical cookies are used to understand how visitors interact with the website. These cookies help provide information on metrics the number of visitors, bounce rate, traffic source, etc.
Advertisement
Advertisement cookies are used to provide visitors with relevant ads and marketing campaigns. These cookies track visitors across websites and collect information to provide customized ads.
Others
Other uncategorized cookies are those that are being analyzed and have not been classified into a category as yet.
ACCETTA E SALVA