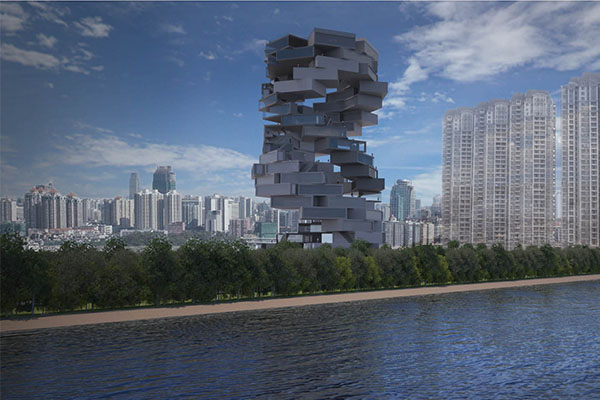 descrizione
Rots is a new concept of working environment for young people.
Program.
We developed two types of studios like ateliers with two sizes. In order to offer the studio users everything could be needed, we put in the basement a work laboratory with machinery, one auditorium to present the own work and exhibition spaces and a sky bar.
History.
We felt right away the silo would have strongly influenced the project in some way. The site was an ex-packaging factory so we had somehow to create boxes. We had also another important element: the water basin that grew naturally after the site was dismissed.
Icons.
We removed the water and as symbol of the old element and we replaced it with glass. Under the glass we put a basement with all workshops spaces. We packed our program in many boxes and develop a system of singular units of 100m2 and just put them in a chaotic way on the site. We had to give some order to this complete chaos and we piled the boxes in 4 towers. We extended symbolically the silo to the sky by twisting the towers around it. With the twist we achieved terraces for every unit and a vertical promenade to the top of the tower to claim exercise and movement.
Final
The final design propose 2843 m2 for the basement workshop space with adjacent storage room, toilets and cafeterias. This space together also with the 450 m2 auditorium. Over that the silo the ateliers divided in 31 single unit with 100m2 and 17 double unit with 220m2. At the top of the tower there is an exhibition space and a sky. On the roof top there is also a panoramic terrace with an open view on 360┬░ of Guangzhou.
(andrea vattovani architecture)

This website uses cookies to improve your experience while you navigate through the website. Out of these, the cookies that are categorized as necessary are stored on your browser as they are essential for the working of basic functionalities of the website. We also use third-party cookies that help us analyze and understand how you use this website. These cookies will be stored in your browser only with your consent. You also have the option to opt-out of these cookies. But opting out of some of these cookies may affect your browsing experience.
Necessary Sempre abilitato
Necessary cookies are absolutely essential for the website to function properly. These cookies ensure basic functionalities and security features of the website, anonymously.
Functional
Functional cookies help to perform certain functionalities like sharing the content of the website on social media platforms, collect feedbacks, and other third-party features.
Performance
Performance cookies are used to understand and analyze the key performance indexes of the website which helps in delivering a better user experience for the visitors.
Analytics
Analytical cookies are used to understand how visitors interact with the website. These cookies help provide information on metrics the number of visitors, bounce rate, traffic source, etc.
Advertisement
Advertisement cookies are used to provide visitors with relevant ads and marketing campaigns. These cookies track visitors across websites and collect information to provide customized ads.
Others
Other uncategorized cookies are those that are being analyzed and have not been classified into a category as yet.
ACCETTA E SALVA